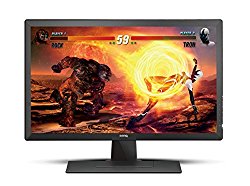 Every detail of the RL-series is designed and fine-tuned for the exceptional console eSports experience. The ZOWIE RL-series has been adopted worldwide by professional eSports tournaments and players. With your persistence and dedication to win backed by the exclusive features of the RL-series, you will be armed to compete in FPS, fighting or sports games on any console. (Compatible with: PS3, PS4, Xbox 360, Xbox One, Wii and Wii U. RL-series monitors can also be connected to your PC.)